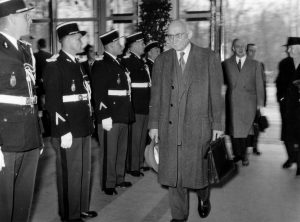 The statesman Robert Schuman, a qualified lawyer and French foreign minister between 1948 and 1952, is regarded as one of the founding fathers of European unity.

Schuman was born in Luxembourg and was influenced by his background in the French-German border region. Despite, or maybe as a result of his experiences in Nazi Germany, he recognised that only a lasting reconciliation with Germany could form the basis for a united Europe. Deported to Germany in 1940, he joined the French Resistance upon fleeing two years later. In spite of this, he showed no resentment when, following the war, he became foreign minister.

In cooperation with Jean Monnet he drew up the internationally renowned Schuman Plan, which he published on 9 May 1950, the date now regarded as the birth of the European Union. He proposed joint control of coal and steel production, the most important materials for the armaments industry. The basic idea was that whoever did not have control over coal and steel production would not be able to fight a war.

Schuman also supported the formation of a common European defence policy, and held the post of President of the European Parliament from 1958 to 1960.