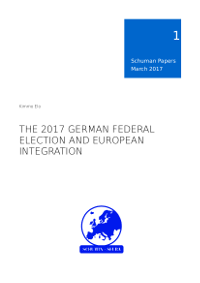 was published on the 28th of March 2017. The paper focuses on the analysis of the upcoming German Federal Election. The author of the paper, Dr Kimmo Elo, is a joint senior lecturer in European Studies at the University of Turku and Åbo Akademi University. Dr Elo is a distinguished expert on German and European politics and history.

In the 2017 German Federal Election to be held on the 24th of September 2017, Chancellor Angela Merkel is looking for her fourth successive term after having held the office for 12 years. The election will not be only about measuring the support for Chancellor Merkel and her government, but also about determining the guidelines of the European policy of the biggest national economy, Germany, for the next four years.

For a number of reasons the context in which the German 2017 Federal Election will take place is a challenging, yet interesting, one. The eurozone crisis has plagued the European economy for almost a decade with no clear solution in sight. The refugee crisis has been causing severe political tensions among the EU member states. The EU’s relations with Russia on the one hand, and Turkey on the other, have hit the rock bottom with no fast recovery in sight. Finally, the election of the new President of the United States, Donald Trump, rises huge questions concerning the future of the transatlantic relations.

The refugee crisis has strengthened the far-right-wing populism also in Germany. One of the key questions regarding the 2017 Federal Election will be the support for the Alternative for Germany (AfD). Since all parties currently represented in the German parliament, Bundestag, have rejected coalitions with the AfD, the most probable outcome in the case the AfD enters the Budestag is the renewal of the Grand Coalition for the term 2017-2021. The race for the Chancellorship is going to be between Angela Merkel, representing the CDU/CSU, and Martin Schulz, representing the SPD. The rise of the AfD would impede Merkel’s plan to be reelected, for the stronger the AfD becomes, the fewer coalition options available for Merkel’s conservatives there are.

Next Post: Schuman Papers 2/2017 about the EU’s Strategy for the Baltic Sea Region