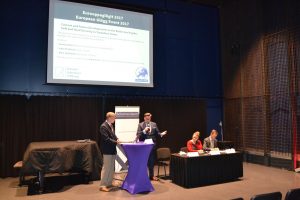 The European Glögg Event, the Schuman Society’s traditional pre-Christmas event was organised this year on 11 December 2017 in MOVE 1 seminar hall of the Logomo event center in Turku. The event was attended by approximately thirty people and it was arranged in cooperation with the Konrad Adenauer Foundation’s office for the Baltic and the Nordic Countries. At the Glögg Event an international panel discussion that focused on contemporary issues in European security and cooperation was followed by a reception that offered the participants a memorable possibility to enjoy a delicious finger food menu prepared by the Logomo Kitchen. The event was brought to a head with a solemn ceremony celebrating Mr. Ossi Tuusvuori’s long and fruitful 11-year-career as the chair of the Schuman Society.

The European Glögg Event is a tradition of the Schuman Society, offering nourishment for both the body and the soul, and the year 2017 was no exception to this rule. The event was opened by a panel discussion of a high level that revolved around the title “Current and Future Developments in the Baltic Sea Region: Soft and Hard Security in Turbulent Times”. During the discussion the Baltic Sea region was embedded into the bigger picture of European development in terms of security and cooperation. The panelist:

are acknowledged experts in European and Baltic politics. Their message was clear: without purposeful actions to strengthen Europe in general and the EU in particular, Europe cannot provide meaningful responses to the challenges caused by the unpredictable stop-go politics of the president Trump, the rise of China as a global power and Russia’s aggressive foreign policy. Yet at the same time, the EU is internally torn apart by discrepancies in economic and refugee policy.

The panel discussion was followed by a reception during which the participants had an opportunity to proceed with discussions concerning the panel topics and other European affairs, and to enjoy the delicious finger food menu prepared by the Logomo Kitchen.

The event was rounded up with a solemn celebration ceremony dedicated to Mr. Ossi Tuusvuori, the Schuman Society’s chair of long standing. Ossi chaired the society from 2006 to 2017 and in his speech Ossi recalled his long career with European integration, a career that has been extremely helpful also for his chairmanship. 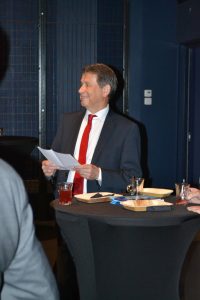 In his reply, Ossi’s successor to the chair, Dr. Kimmo Elo, thanked Ossi for his long engagement in the Schuman Society and highlighted the importance of the society’s strategic process introduced in 2015. There is a strong, growing demand on fact-based knowledge of Europe, the EU and European integration, and the Schuman Society must respond to this demand by providing substance in the form of publications, events and other expertise of the highest quality. Dr. Elo concluded that although the Schuman Society is on a good track after Ossi’s chairmanship, the period 2018-2019 is going to be demanding and a lot of work needs to be done in order to convince people why the EU is still the best possible answer in today’s global world, both in sunny and rainy days.

Comments are closed, but trackbacks and pingbacks are open.